Forum Rules (Read before posting) by RyanAB
—THE RULES—

-Basic Rules (You should only need these, but if you are extra cautious, we have detailed versions down below!)-

If you see someone breaking a rule, use the report feature (found in the gear button on the top-right corner) to report them to the staff so that they can be dealt with. 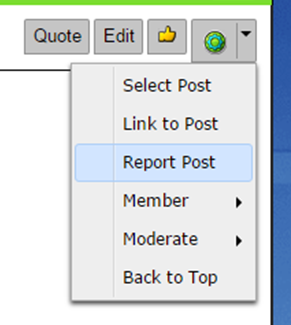 -Detailed Rules-
SPOILER: Click to show
1. Respect everyone, including normal users, staff, and even those who aren’t respecting you. This means not insulting/flaming people or engaging in any form of racism/sexism/bigotry. Be respectful of others’ privacy, so do not doxx or post anyone’s personal information. Also, no trolling/tricking. Swearing is allowed, but only in using it in such a way that it does not break other rules.

2. In general, spam is anything that makes the forum difficult to read. Threads that serve no purpose are not allowed outside of the Nonsense Lounge*. Various types of spamming include: “bumping" (except on collab and verify request boards, when appropriate), off-topic posting, post-spamming in a thread, useless walls of text, emote spamming, duplicate threads, clickbait titles, bot-like spam, media spam, and notification spam. Advertising is not okay, and especially please do not tag/quote RobTop asking for him to look at your level. Also, any post that does not contribute to the thread in any way (adding new information, answering/asking a question, making a comment/joke related to the topic, etc.) is considered a type of spam and is not allowed. As a general rule, if you don’t really care, don’t post.

3. In this case, participating in drama includes both saying/doing things that are liable to start it and/or feed it. Drama includes encouraging hate toward, gossiping about, or otherwise negative “excitement” about a particular person or persons, whether they are members of the forum or not.

4. Do not link to or promote hacks that can be used maliciously. Most creating hacks are okay (i.e. object limit bypass). However, linking to or promoting anything used for cheating or malicious activity is grounds for serious punishment. These include but are not limited to: hacks that change your statistics in any way, speed hacks, flooding or manipulation of RobTop's servers, hacking of user accounts, copy hacking others' levels and granting someone level moderator permissions; furthermore, linking to APKs of any kind are not allowed because it is a violation of piracy laws.

5. “NSFW” means “Not Safe For Work.” It refers to something you wouldn’t want an employer (or school principal) to know you have seen with their computer. This includes media containing explicit and “gross” material, such as pornography or gruesome violence. Additionally, talking about anything not PG-13 (generally not appropriate for 13-year-olds) is not allowed (no sexual jokes).

6. Most of the “dodgy stuff” should be obvious. If you are banned, using guest accounts/multiple accounts/proxies or any other way to bypass your ban is not allowed. Do not use guest/alternate accounts to play pranks, sockpuppet (which means pretending to be someone you are not), etc. Furthermore, special characters, BBcode tricks, etc. that “break” the forum are prohibited. Finally, do not post links to anything “harmful,” including but not limited to: screamers, scams, and malware/viruses.

7. Threads where the last reply is older than two months have usually become irrelevant and do not need to resurface. However, if the thread can still be considered relevant and the necropost adds to the thread, it is usually exempted from the rule. This rule does not apply to The Nonsense Lounge, and usually not to Forum Games (unless you're being obnoxious).

8. Joke posts or posts that are considered useless (such as “k” or just emotes) in threads tagged with the serious tag are not allowed. These threads are intended for uninterrupted discussion, possibly about a sensitive topic. However, when making a thread, do not abuse this tag for a purpose that it’s not intended for.

9. Make sure to read all the board descriptions to know which section your thread belongs in. If you accidentally posted a thread in the wrong section, tag a staff member to move it for you.

*In the Nonsense Lounge, rules #2, #7, and #8 are enforced far more laxly. This is a place where you can spam and make nonsense posts freely, as long as they don't break the rules in that board.

Anything else deemed harmful for the users or environment of the forum may be punished by the staff.

Current list of staff is in the spoiler below:
SPOILER: Click to show
Moderators: GPM1000 , CreativeGuy  , Aviary , headhonchkrow , DubstepJoltik

*Some staff members listed here don't have the icon next to their name, but they are still staff.

Each member has a unique warning percentage. Everyone starts out at 0%, and when you reach 100%, you will be be banned (temporarily or permanently, depending on the circumstances). Whenever you break a rule, your warning percentage will rise. You will also get a notification telling you how much it went up and PM notifying you of what you did wrong. The amount that the warning percentage rises depends on how severe the infraction was.
If you think you were warned unfairly, send a PM to the staff so we can discuss it.

Certain rules have much more severe consequences than others, and will result in a much higher increase of the warning percentage or even a ban. Open the spoiler below to see the approximate severity of each infraction.

Moderate:
-Posting minor personal information of anyone without permission (such as real names)
-Walls of text, emote spamming, notification spamming, and more severe types of spam
-Participation in drama
-Disrespect toward other members or staff
-Trolling/tricking people with fake information and such
-Blatant and annoying advertising, outside of the proper sections
-More explicit/major sexual jokes or references
-Sockpuppeting
-Multiple Minor infractions

Severe (may result in an immediate ban):
-Posting sensitive personal information of anyone without permission
-Doxxing and other malicious activity
-Rampant and intentional breaking of one of several of any other rules many times, which includes bot-like spamming
-Ban evasion by using other accounts, guest accounts, and such
-Multiple major infractions

1. This forum is mainly in English, so it’s recommended that that’s what you type in.
2. Read through this useful forum PSA: gdforum.freeforums.net/thread/12620/forum-psa-good-member
3. Have fun!